If you like nature, landscapes, mountains, rocks and the ocean as well as active rest then Madeira will be a paradise for you! The best way to visit Madeira is to rent a car and tour the most interesting tourist attractions. Madeira is not a large island and you can drive around it in one day. There are highways and expressways and numerous tunnels that greatly facilitate getting around the island. But when you get off the main roads and take off the winding narrow mountain roads there will be the most emotions and the most interesting views.

I will start maybe unusually for visiting Madeira but I will start from the forest... because I really like the forests. I recommend traveling by road No. ER103 - the foggy views in the woods of "Parque Natural do Ribeiro Frio" are amazing.

The capital of Madeira

We started visiting Madeira with a walk around Fuchnal. Funchal is the capital of Madeira and the largest city on the island - more than 100,000 inhabitants live here. The ability to build houses and roads on extremely steep mountain slopes is amazing.

We rented a car in Funchal and drove west along the coast. After less than 15 minutes we arrived to Câmara de Lobos - the second largest city in Madeira. Câmara de Lobos - a beautifully situated port town in the south of Madeira. A rocky bay, a small fishing port, colorful boats, interesting architecture and mountains around.

The south coast of the island is the warmest area in Madeira. There is Câmara de Lobos in the picture - a charming town with a fishing port. There is also Cabo Girão - the second highest cliff in Europe.

Dense buildings, houses in bright colors, characteristic roofs, brick tile, wooden shutters are typical architecture of Madeira. I like such views - perfect for shooting with a telephoto lens.

To the west of Câmara de Lobos is Cabo Girão (589 m a.s.l.) - one of the highest cliffs in Europe. There is a viewpoint (Miradouro do Cabo Girão) with a platform with partially glazed floor at the top of the cliff. Entering this glass platform is an interesting experience. 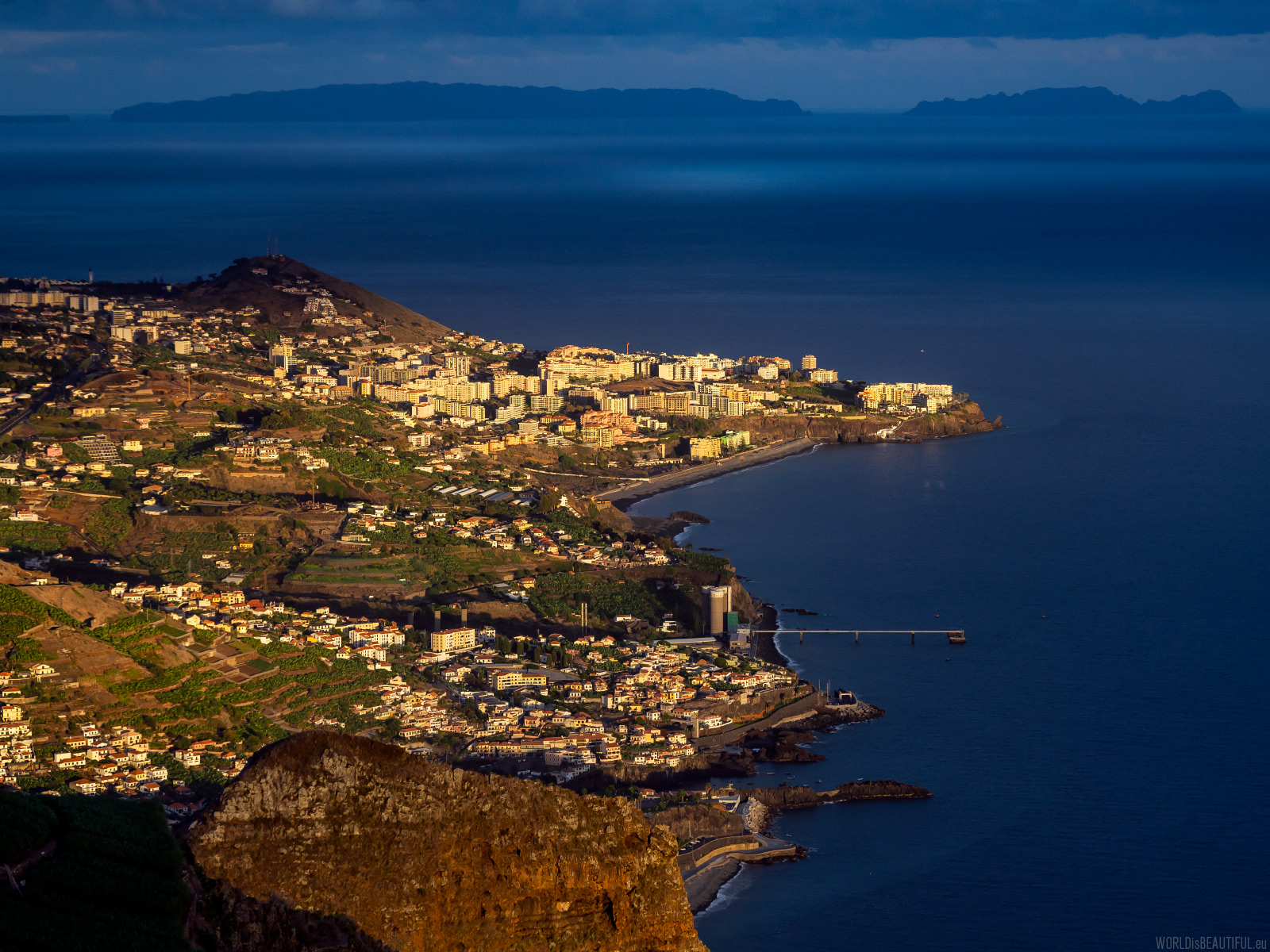 I would recommend entrance to the Cabo Girão (589 m n.p.m) at sunset. Picture from one of Madeira's most famous viewpoints: Câmara de Lobos, Fuchnal and Ilhas Desertas on the horizon.

Ribeira Brava is another place that we visited on the southern coast of the island. A large rocky beach, a small fishing port, the historic church of St. Benedict, shops, cafes, taverns, views of the cliffs and the ocean.

An artificial bay, marina and Praia da Calheta beach in the south of the island. See more photos and exact locations of Madeira beaches in this gallery.

Trekking in the mountains of Madeira

Madeira is a mountainous island. Numerous mountain ranges are separated by deep valleys. There is a view from the hiking trail to Pico Ruivo (1,862 m a.s.l.) in the picture. More photos and description of the trip to the highest peak of Madeira are in the gallery: Madeira mountains - Pico Ruivo trekking.

One of the most interesting attractions for active tourists in Madeira are trekking routes along the levadas. A levada is an irrigation channel carved in the slopes of the mountains, through which water is fed from the mountainous part of the island to agricultural areas. I invite you to watch photos from our hiking along the PR 9 trail - Levada to Caldeirão Verde in the gallery: Levada Walks in Madeira.

The western part of Madeira has a much less developed tourist infrastructure. There are many small villages here, a lot of natural space and amazing scenic spots, which are often led by signposts on the main road. That's how we got to Lombada Velha. There is a small Chapel of Our Lady of Good Death (Capela de Nossa Senhora Boa Morte) on top.

Lookout Boa Morte which means Good Death. Rural landscapes and idyllic views, natural rhythm of life... there are animals, someone has to feed them ...

A paradise for animals

Views of the west coast of Madeira. Amazing colors of water in the ocean, high rocky cliffs and relaxation on green grass - paradise! On the map I marked the place where I took this photo. 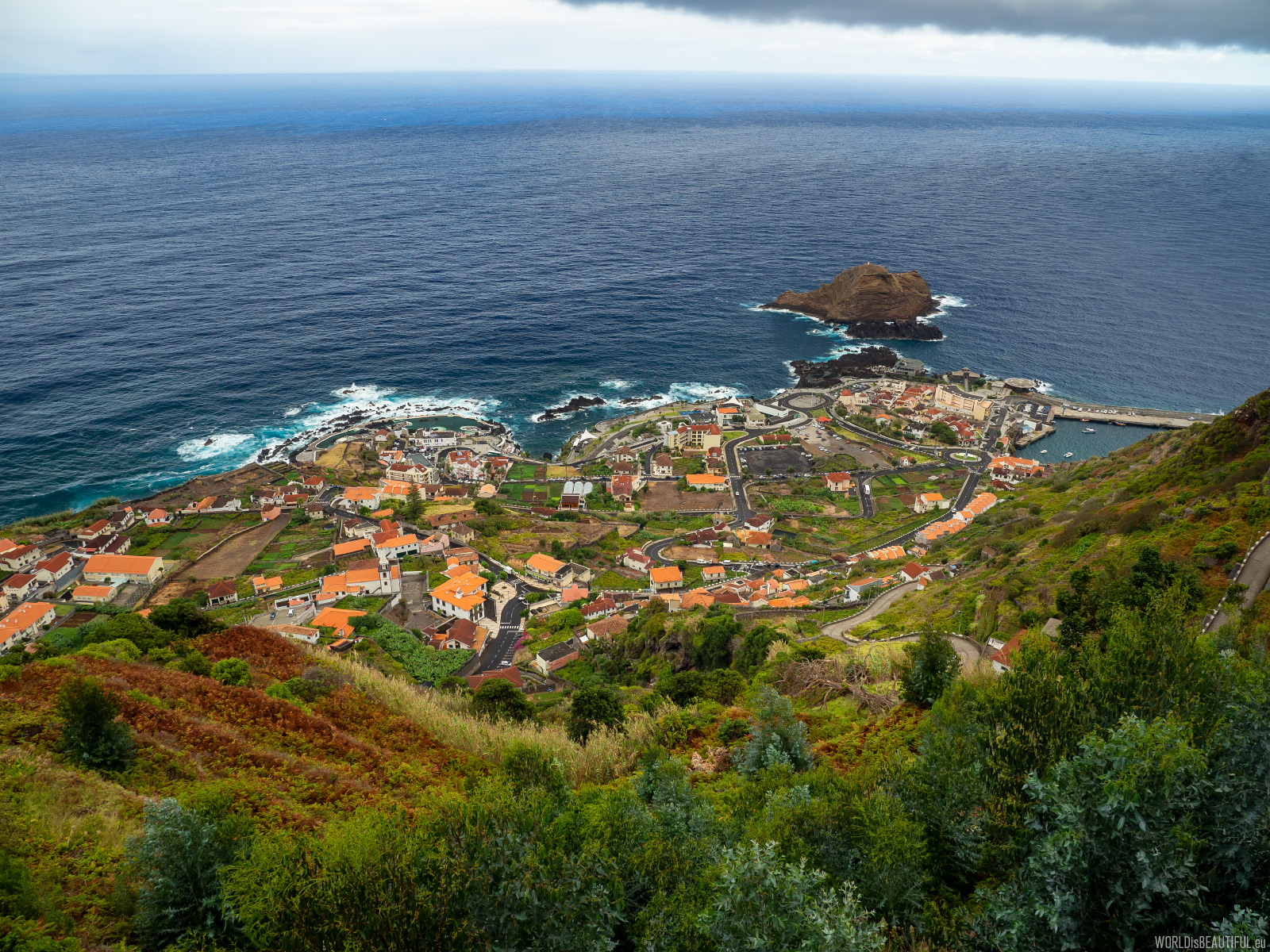 Driving north along road No. ER101 we reached Porto Moniz. The natural volcanic pools formed by volcanic lava are the most popular tourist attraction of this small town.

Madeira is a volcanic island

Volcanic rocks on the coast next to lava pools in Porto Moniz.

A meeting of two elements

Here you can see the meeting place of two elements - fire and water - lava and ocean. There is a rocky ocean shore at Porto Moniz in the picture.

Coming east from Porto Moniz by the VE2 road you can turn towards the ocean to the beach in Ribeira da Janela. These amazing rocks in the Atlantic are the islands: Ilheus da Rib and Ilheus da Janela. I marked the exact location of the beach on the map.

Pyramids of stones on the beach of Ilheus da Ribeira da Janela. 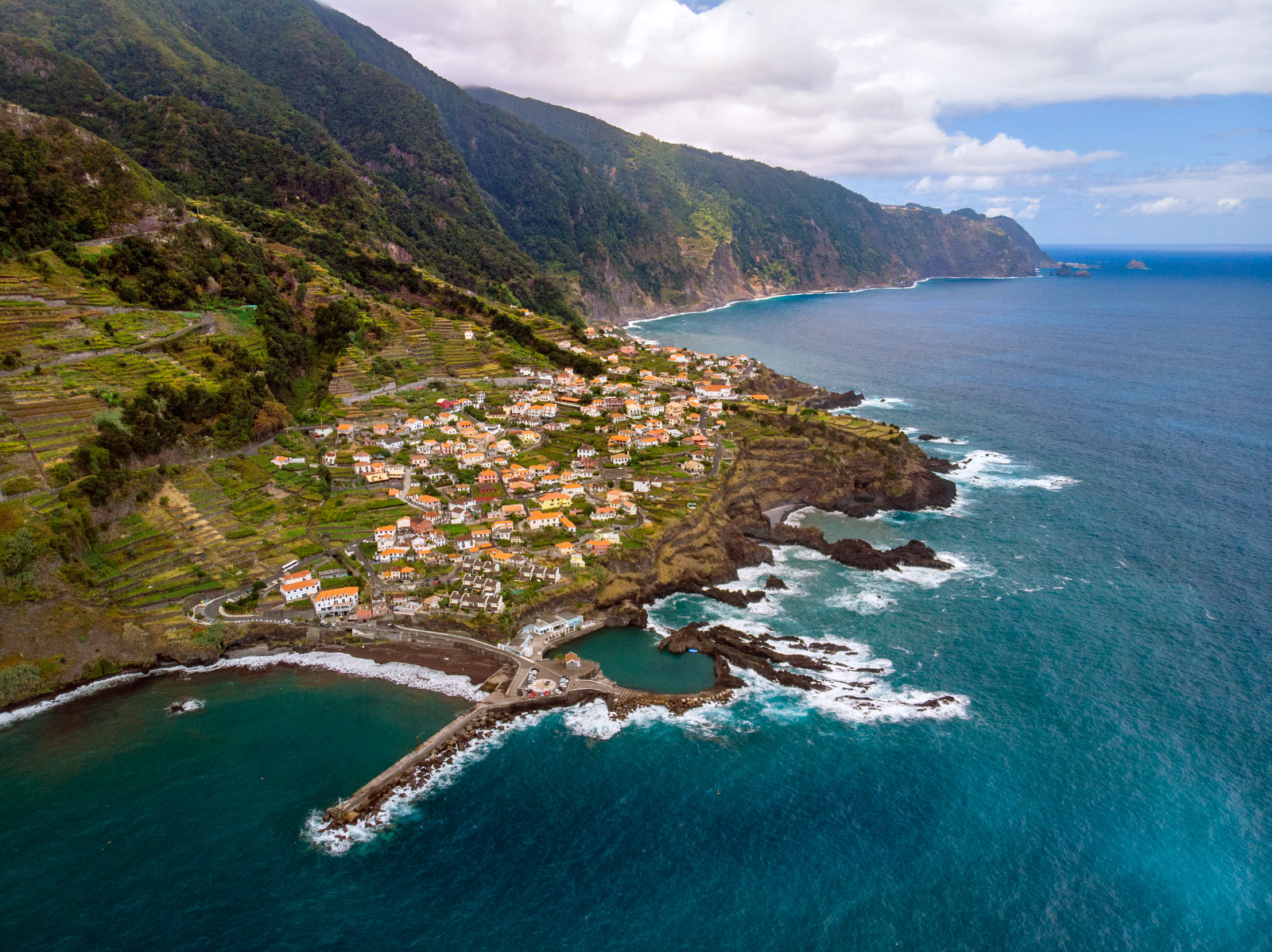 View of the Seixal and the north coast of Madeira. Seixal is a small village famous for: black sand beach sheltered by a breakwater, volcanic natural pools and high rocky mountains with waterfalls. Here you can see more Madeira beaches.

Endless ocean, the sound of waves, a light wind, a rocky shore, thousands of shades of blue, blues and navy blue... 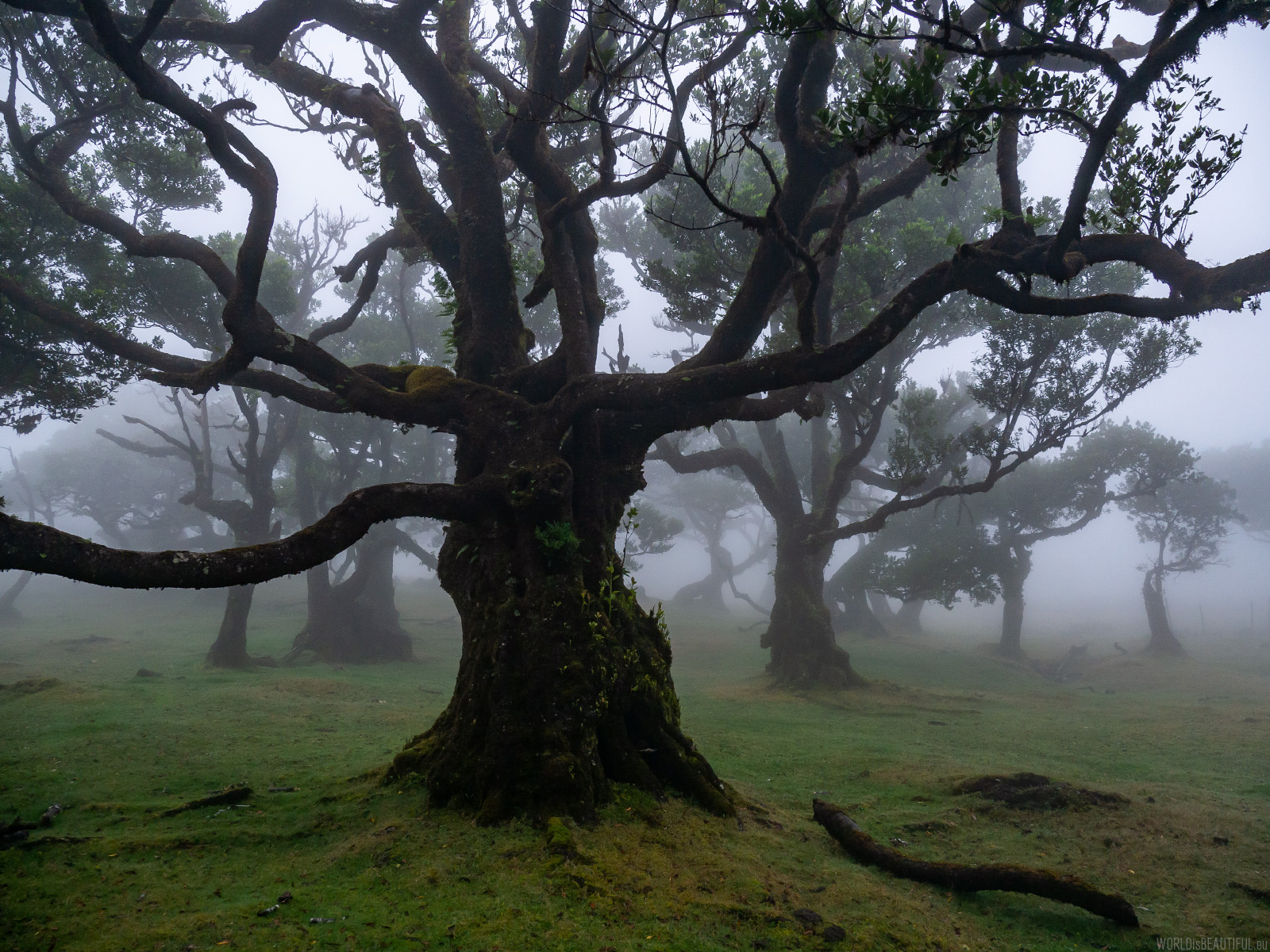 The famous magical and misty laurel forest (Posto Florestal Fanal) by the ER209 road in Madeira. I marked the exact location of this amazing place on the map. You can see more photos in the gallery: Fanal forest in Madeira.

The advantage of this hotel is its location, spacious rooms with balcons, good food, car parking and Wi-Fi included in the price.

If you come to explore the island and Funchal it is a very good choice.

BOOK A ROOM AT THIS HOTEL

Gdańsk from the sky

Gdynia from a bird's eye view

Cruise around Żuławy in Poland

Welcome to my world

Under the Tatra Mountains

What to see in Bergamo

Kayaking on Wda river in Poland

Szczeliniec - attractions of the Table Mountains

Spring in the Bieszczady Mountains

Learning to fly a drone

From Hell to Hell